Venezuela’s currency is in free fall. Cryptocurrencies such as bitcoin are going precisely the other direction. And there, President Nicolas Maduro sees a way out of his country’s economic ills. 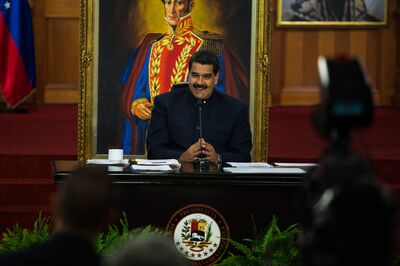 On his Sunday television show, Maduro announced the nation would create its own “petrocurrency,” backed by reserves in oil, gas, gold and diamonds. It will enable Venezuela “to advance in monetary sovereignty, carry out its financial transactions to overcome the financial blockade,” Maduro said.

“This will allow us to advance toward new forms of international financing for the country’s social and economic development,” he said.
The black market rate for one dollar weakened to 103,000 bolivars on Friday compared with 10,000 at the end of July, according to dolartoday.com, a website that tracks the data. The International Monetary Fund sees Venezuela’s economy shrinking 12 percent this year and annual inflation rising beyond 2,300 percent in 2018.
Bitcoin rose on Friday after CME Group Inc. and Cboe Global Markets Inc. said they will offer futures contracts as soon as this month, capping a record-breaking week. The world’s largest digital currency surged about 30 percent last week, reaching a record high of $11,434 on Nov. 29.

Maduro’s government persists in laying the blame for the country’s economic woes at the feet of an opposition conspiracy to overthrow him and, more recently, U.S. sanctions that have limited its ability to restructure its debts. As the country finishes its fourth straight year of recession, some voices in the ruling socialist party are calling for a more market-friendly approach.

Jesus Faria, a self-proclaimed Marxist economist and a former trade minister who’s now a member of the constituent assembly, recently said about the current foreign-exchange policy that a “truly free exchange market has to be established, where supply and demand meet to fix the price.”